Although it's called Svelte Headroom, I use this package nearly twice as often to add a "to top" button to my footer!

Have you ever muttered under your breath at the stupid website whose fixed header takes up WAY TOO MUCH SPACE!? I have.

The act of scrolling down a page is an indication that you’re interested in the content, so why not make that easier for the visitor by hiding distractions?

I feel like the site cares about my experience when a fixed header gets out of the way; I feel like leaving the site if the fixed header, usually a top menu navigation, covers too much of the page.

Used on This Site

You can see this package used right here, on this site’s header and ^ (To Top) button in the footer. I’ve been using my own custom derivative of collardeau/svelte-headroom on a few sites for a while but each project had its own copy, you know, the wrong way to re-use code.

I’ve released this as a public NPM package to make it much easier to use in other projects. I hope you may also find it helpful if you’re looking for a solution to automatically show or hide headers or footers in your Svelte project!

Although I’ve used many packages from NPM, I’d not yet made any attempt to publish my own. It’s not really difficult but I couldn’t find a way to publish an updated version directly from the code I forked from Thomas Collardeau because the package production in SvelteKit changed since Thomas’s code was released with related version updates to Svelte and the introduction of SvelteKit.

I read SvelteKit Packaging to learn the current advised way of creating a package for Svelte. Basically, put your component in the $lib folder and use /src/routes/+page.svelte to develop. Brilliant!

The command svelte-package spits out the package to the ./package/ folder and that can be published to NPM, Github packages or otherwise.

Challenges I Encountered Publishing to NPM

First, it’s not really difficult at all to publish a package to NPM. It takes zero certification or approval. Aces. But, given that I have not previously published a package to NPM, my unfamiliarity contributed to the challenges I stumbled through.

I inspected the package and discovered that I needed to make some adjustments to the "files" array in my package.json. I needed to add "headroom" for NPM to include the folder with the code in $lib. My first few publications failed to import headroom/index.svelte because that folder wasn’t specified so it wasn’t included in the package.

I’ve been using Conventional Commit message format for a few years. I’ve used git for much longer but my projects haven’t often had multiple contributors so it been a discipline that I started to adopt looking towards the future with tooling such as Semantic Release and greater ease of collaboration.

The message format makes sense to me and I really like that automation can manage versions, changelogs and all so I don’t have to remember.

I’ve been familiar with GitHub Actions for automated build and deploy of Hugo sites and figured I could sort out the details to publish this Svelte package.

After adding the NPM_TOKEN secret to the GitHub repository, I found that I only needed to add working-directory: package to the Release step (run: npx semantic-release) after the npm install and npm run build commands. See release.yml for the workflow that worked for me.

Once I had all of that automated build plumbing established, I was trying to maintain 2 README files, separately. This sucked. I simply couldn’t get them to stay in-sync.

Similar to how this blog works, I reduced my README to 1 file by using mdsvex and vite import to use the contents of the README in the src/routes/+page.svelte.

This started in the root of the repository (/README.md), which also becomes the package README, but it looked bad on GitHub and NPM because I used extended markdown for heading IDs: ### This Heading {#heading-id}.

Using replaceAll(/ \{#.*\}/g,'') on the /src/_README.md (the new master readme) handily cleans out the extend syntax on the headings. This runs on every npm run build, keeping it in-sync. 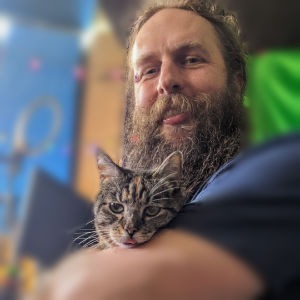